Hello all! Happy New Year! I hope you had a beautiful holiday season, regardless of what you celebrate, a time full of joy, family, relaxation, and goodness. And I pray that this new year brings wonderful and exciting things for you, a year of growth and stimulation.

This is a beautifully big year for me. In four months, to the day, I will graduate college with my Bachelor’s degree in Psychology. I am actively putting out applications for full-time positions for after graduation. And, in eight months, I get to marry the love of my life.

I’ve also made a very intentional effort to start the year focused and unburdened. Two days before Christmas, I impulsively uninstalled my social media apps from my phone, and I haven’t look back since. I’ve gotten on twice, on my laptop, and was on for a purpose. Since creating space between me and social media, I have become less concerned about other people’s lives and when I am on, I’m actually irritated by the “need” to scroll through my newsfeeds. I love the clarity of mind this has created and a larger sense of personal reflection and insight. (I have also developed a significantly lower tolerance for those people that are attached to their phones like an umbilical cord.)

Right around Christmas time, I had three very different experiences that lead to my perspective changing on a few things, just like my perspective on social media.

The week of December 10th, I had two, starkly different, musical experiences. Through a series of very spontaneous events, my fiance and I, and one of his best friends, ended up at a local theater watching metal bands and standing at the edges of the mosh pit. 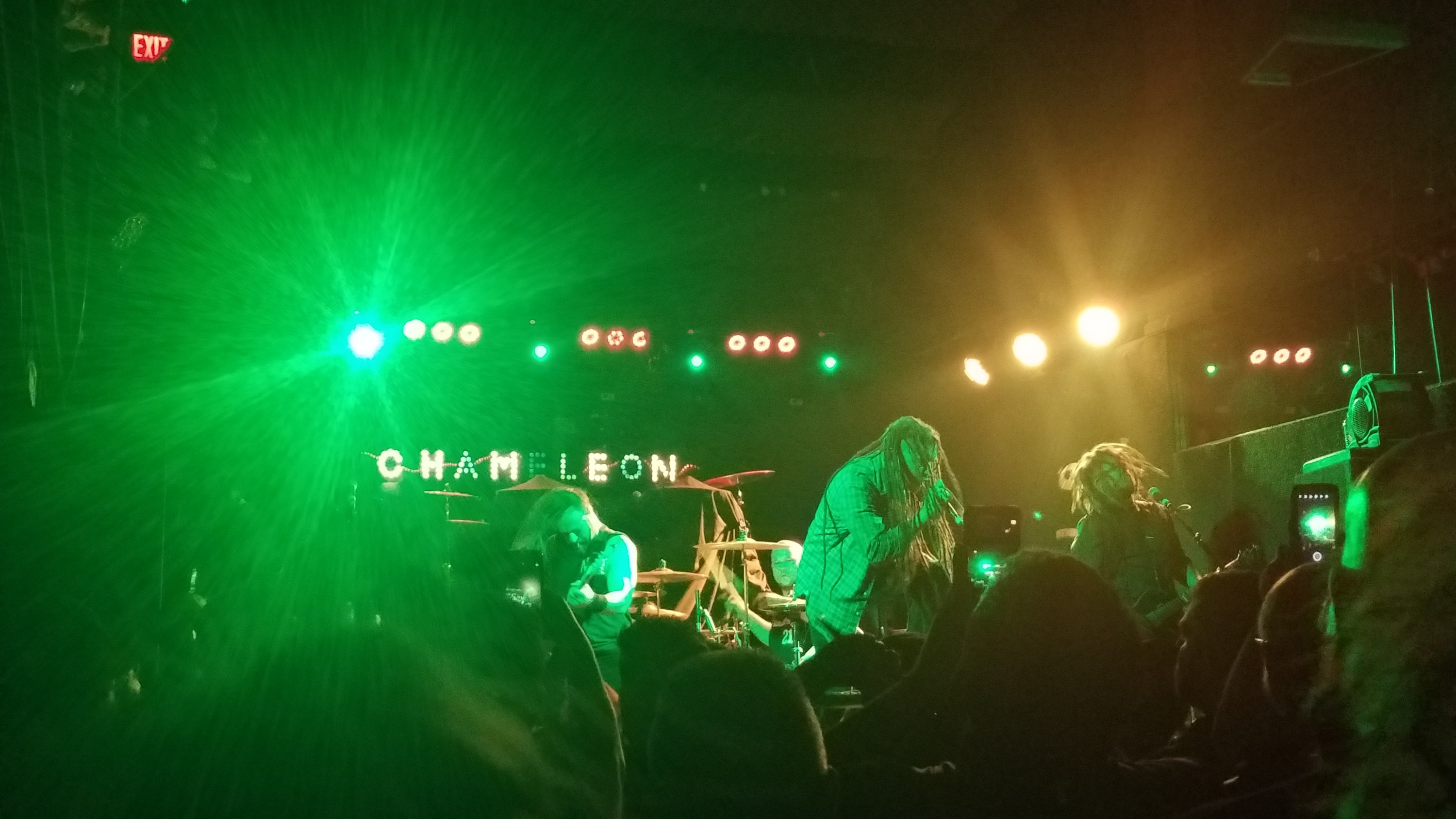 This was a wild experience for me, as the first two bands were secular and wild. The second band (pictured) opened with “Put your middle fingers in the air.” You can probably imagine the shocked look on my face. The third band, P.O.D., is a Christian metal band. P.O.D, and this scene, was what my fiance grew up with, and though I was way wayyy out of my comfort zone, he was really happy that I was there with him.

We pushed against the mosh pit. We saw some one very similar in appearance to Bernie Sanders moshing (which was hysterical). We saw a young woman get some teeth knocked out. We saw crowd-surfers get yancked down by security, and I almost got knocked over by a bulky security on a mission. Someone also tried to use my shoulder as a stepping stool to get up on the crowd to surf. Our feet got stuck to the ground in multiple places, much like quick sand, due to the quantity of spilt beer. But, we also saw people push the crowd away when someone fell to the floor, and multiple people helped the fallen person up.

Walking back to the car, we both reflected on the concert. We observed a clash of generations, middle aged men, fathers with sons, and some with their daughters, many parents out on a date, and there were even some people my age or younger (though we were defintely in the minority). We discussed how Christian metal can serve as a connection the church for the Christians that can’t stand “normal” worship music. We talked about how this music, “happy music for angry people”, probably helps to keep a lot of people out of jail. We also talked about how this experience helped me to rearrange my perspective on metal music and this culture.

Since the concert, my fiance has  exposed me to Rob Zombie, Disturbed, and many others. My already eclectic listening is getting larger ….

That week, we, and my family, saw the Glenn Miller Orchestra perform at the local college. I am a big fan of Glenn Miller, and big band style music.

This concert, obviously, was in really start contrast from the experience just a few days before. The audience was mostly elderly people. Though my youngest brother (who is seventeen) was not the youngest, us “youngsters” were very much out-numbered, even people my parents age were.

While the fans at the P.O.D. concert constantly had their phones out, the audience for Glenn Miller sat transfixed.  At the metal concert, there was a general atmosphere of rambunctiousness and, perhaps, aggression, but the orchestra concert felt as if we were transported back to the 1940’s, with all of its glitz and glamour and class.

Second, Christmas time always brings up the controversial song “Baby, It’s Cold Outside”. I have always interpreted this song to be a dialog between lovers, as the interaction between the two singers always created for me a sense of not wanting to leave each other and venture into the cold.

However, this post isn’t going to be about” why I am right”; its simply an exploration of different perspectives.  I was in a situation, prior to Christmas, where I was talking with some other women my age about this song.  None of them expressed an understanding of this song in the “date rape” context, and actually supported my understanding of this song.  I understand that not every person interprets things the same ways, but I valued this conversation, as it opened my eyes to the idea that more people may believe, and think, similar things that I do.  It acted as a reassurance and a support.

Finally, I am not someone who sees the importance of saying “Happy Holidays” when I personally celebrate Christmas.  I have always been of the mindset that expressing my “season’s greetings” allows my conversation partner to express theirs back to me.  I think this is a healthy exchange of ideas, as it allows us both to share our different faiths in non-aggressive, or passive aggressive ways.

I was at work, one day before Christmas, when I encountered this head on.  It is important to know that my field (human services, specifically aiding those with disabilities) is full of staff of different ethnic backgrounds, religious beliefs, and political ideologies.  This particular day, my relief staff was a woman who appeared to be from a Hindu or similar background.  We spoke very little, just enough for me to give her a run-down of the day, and to exchange pleasantries.  As I was leaving, I wished her and the individual in the home “Merry Christmas”.  She looked at me, but didn’t return the sentiment.  She was friendly, but she didn’t offer me a greeting.

I don’t care that I didn’t receive a greeting; I was more disappointed at the missed opportunity to engage in a conversation about the different holidays  at that time of year.  I personally think “Happy Holidays” is superficial and cheap, and I would rather hear a greeting from what ever my conversation partner celebrates.

This situation, though small and rather insignificant, helped me to experience first hand an interaction between different beliefs, and my perspective on this holiday “conversation” has strengthened, as I feel that instead of offending other people, we should be more interested in learning from each other.  But that is just my perspective.